Do give books – religious or otherwise – for Christmas. They’re never fattening, seldom sinful, and permanently personal.

-editor Lenore Hershey, who held the top spot at McCall’s magazine and The Ladies’ Home Journal

I am fortunate to have two, good local bookstores in easy driving distance.  Common Good Books, Garrison Keillor’s store, is in St. Paul about a half hour away.  Here in downtown Stillwater is Valley Booksellers, about five minutes away.  Both are great stores that I patronize as much as possible.  I also buy from Amazon and Barnes & Noble, and I use the Carnegie library in Stillwater.

The Words Of Wisdom in this post’s title are not mine, they are from Precious Ramotswe and other characters from Alexander McCall Smith’s No. 1 Ladies’ Detective Agency series.  In case you don’t know,  Mma Ramotswe is the owner and top detective in the agency.  The word of wisdom that follow are from the second book in the series, Tears Of the Giraffe.

This was part and parcel of marriage, he assumed; there could be no secrets – everything has to be laid bare.

A man who is well looked-after becomes fatter.  They are just like cattle.  That is well-known.

All ladies believe in diamonds.  That is one thing on which all ladies agree.

All engaged ladies in modern circles receive diamond rings these days.  It is a sign that they are appreciated.

Old diesel engines were generally reliable, but there came a point in their existence when they simply had to be pensioned off.

.  . . how easy it was to find oneself committed to a course of action simply because one lacked the courage to say no.

You should try to marry a policeman, a mechanic, or a minister of religion, she said, and you should never marry a politician, a barman, or a taxi driver.  These people always caused a great deal of trouble for their wives.
“And you shouldn’t marry a trumpeter,” added Mma Ramotswe.  “I made that mistake.  I married a bad man called Note Mokoti.  He played the trumpet.”
“I’m sure that they are not good people to marry,” said Mma Tsbago.  “I shall add them to my list.”

Learn the easy things first and then learn the difficult things.  Not the other way round.

Only those who really understood machinery could conceive of happiness in an engine; it was an insight which the non-mechanically minded simply lacked. 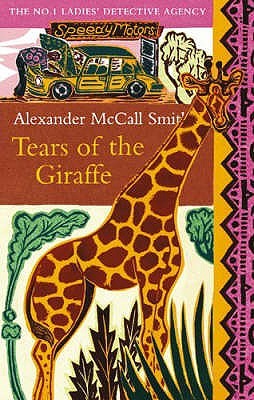 I’ve now read the first two books in the series.  The first was The No. 1 Ladies’ Detective Agency.  I found both books delightful.   In addition to enjoying  The Tears Of the Giraffe,  I felt better after finishing it; I felt like a better person for having read the book.  I found the main characters in the book interesting and admirable; worthy of doing my best to emulate, to want to help others have better lives.   I gave the book four stars on Goodreads.com, but am still thinking of changing to five stars.