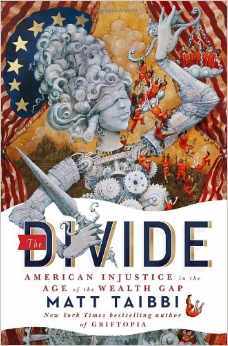 Most of us have heard of the idea that there are large corporations (Wall Street banks, General Motors . . .) that are too big to fail because their failure would seriously disrupt the world’s economy.  Matt Taibbi in The Divide:  American Injustice In the Age Of the Wealth Gap writes that the executives of such firms are too big to jail.  From his introduction:

. . . at the end of a long evolutionary process, in which the rule of law has been replaced by giant idiosyncratic bureaucracies that are designed to criminalize failure, poverty, and weakness on the one hand, and to immunize strength, wealth, and success on the other.

We still have real jury trials, honest judges, and free elections, all the superficial characteristics of a functional, free democracy.  But underneath that surface is a florid and malevolent bureaucracy that mostly (not absolutely, but mostly) keeps the rich and the poor separate through thousands of tiny, scarcely visible inequities.

If you grew up well off, you probably don’t know how easy it is for poor people to end up in jail, often for the same dumb things you yourself did as a kid.

And if you’re broke and have limited experience in the world, you probably have no idea of the sheer scale of the awesome criminal capers that the powerful and politically connected  can get away with, right under the  noses of the rich-people police.

Massive frauds and swindles by Wall Street executives that “cry out for jail terms” if investigated at all end up with “no-jail financial settlements in which the money doesn’t come out of any individual’s pockets”.  On the other hand, in neighborhoods of the poor and disadvantaged “failure to follow a police order, no matter how stupid or unreasonable, is cause for arrest or a summon [does this remind you of the goings on in Ferguson, Missouri?],  prosecutors can turn any misdemeanor case against almost anyone into a de facto  conviction simply by filing charges and following through long enough with  pre-trail pressure to wrest pleas out of the accused.”  In these neighborhoods, police use methods that rely “upon thousands of arrests for trivial offenses, real and imagined.” 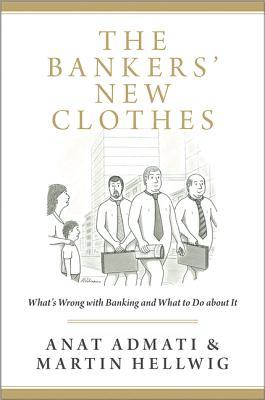 What about too big to bail?  Anat Admati and Martin Hellwig in The Bankers’ New Clothes:  What’s Wrong With Banking and What To Do About It write that

The traumatic Lehman experience has scared most governments into believing that large global banks must not be allowed to fail.  Should any of these large banks get into serious difficulties, however, we may discover that they are not only too big to fail but also too big too save.  There will be no good options.

So, what is to be done? The  wisest course might be to break up the large banks, but I don’t think – given current politics – that will happen.  Tougher regulation?  Also politically unlikely.  Are we stuck with the risky status quo?  Afraid so!