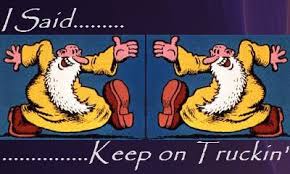 And today I finished Bad Monkey.  A few years ago, a couple for whom  I was house sitting recommended Carl Hiaasen’s novels.  I was skeptical as I usually am when people I don’t know recommend an author that is consistently on the best-seller lists –  a bit snobbish I suppose.  I spent a couple of weeks alone at their house and ended up reading all of their Hiaasen’s.  Bad Monkey is Hiaasen’s  latest.  As usual it takes place in south Florida with lots of offbeat characters, some bad guys, some good guys, but all quirky in some way.  As usual, it aims a lot of heavy sarcasm at timely subjects, in this case medicare fraud, restaurant inspection, and south-Florida real-estate.

Neville Stafford, a Bahamian who lives on the beach on Andros Island (or Cay?), is one of the good guys.  I savored this bit of narrative about Neville:

Neville was thirsty and tired from the slow rolling ride on the mail boat.  His chin dropped to his chest and his eyelids closed as he pondered the difficult path he’d chosen.  People said he was mad not to walk away from Green Beach and take the money [hundreds of thousands].  They laughed about it at the conch shack and called him a simpleton, which stung.  By nature Neville wasn’t a trouble maker; just the opposite.  Never in his life had he thrown a punch in anger or caused a scene, but here was a fight from which he couldn’t turn away.

What would he ever do as a rich man that he couldn’t do now?  Where would he go, and for God’s sake why?  He already lived in the loveliest place imaginable and, besides, he didn’t like to fly.  That’s why he took the mail boat back from Nassau, seven hours by sea being more tolerable that twenty minutes by air.

Neville couldn’t think of anything to buy with all that dirty wealth.  His old bicycle carried him everywhere a car could go, and it didn’t cost six damn dollars a gallon.  Nor did he need a new fishing boat.  The one he owned ran like a champ; the motor was a Yamaha 150, way past warranty, but never had it stranded him, not once.  He wondered if something was mentally wrong with him for being content with what he had . . .

I think Neville is a fortunate man.

I woke up with a cold this morning, and it has gotten worse as the day progressed. The photos I took were mostly when I was lying down. The best I could do was to try to capture a noir look in black and white.  Is it better to get sick on a day of vacation as I did today or to get sick on a work day and have to take a sick day? One of life’s imponderables.