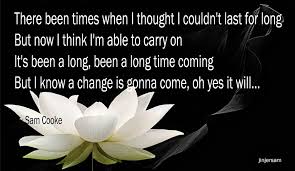 I thought that today, it being Martin Luther King’s day, I would write a bit about Sam Cooke.  I hadn’t planned on it, but then I decided to listen to Sam’s album of the blues while cleaning the kitchen (mundane chores go much better with good music).  My first brainstorm was to write about the album because it’s so fine and I think it has been somewhat forgotten.  Next step:  I realized it was Martin Luther King day and Sam composed and recorded what has become one of the anthems of the Civil Rights Movement.

The song is A Change Is Gonna Come and was actually the B side of a 45-rpm recording.  Sam wrote the song after being refused lodging at  a whites only motel in Louisiana.  Sam and his band mates protested vigorously and were subsequently arrested for disturbing the peace.  Sam also had heard Bob Dylan’s Blowin In the Wind and was chagrined  that a white boy – and not himself – had written such a song.

Sam Cooke was without a doubt one of the finest singers and composers in the fifties and sixties.  He remains an inspiration and an influence.  His music remains fresh. Even on the more frivolous of his songs, the quality of his voice is unmistakable.  If you want to explore his music I would start with one of the many greatest-hits albums and the one I’m listening to as I write – Night Beat from 1963.  Peter Guralnick devotes a chapter to Sam in Sweet Soul Music: Rhythm and Blues and the Southern Dream of Freedom.  A great book for learning more about a great style of music, music with soul.