Last night I listened to one of Tom Waits’s early CDs recorded in 1973.  The first song is Ole ’55, one of my all time favorite songs.  This CD is “normal” singer-songwriter music; melodic, lyrical, sentimental, somewhat melancholy – enjoyable.  As Waits became older his music became increasingly weirder.  He seems to be a strange man.

I have a CD from thirty years later, Alice, recorded in 2002.  The artwork on the cover of Alice makes me think of an old-fashion carnival side-show with odd, misshapen creatures.  Tom is still Tom – the music from 2002 retains qualities of the music from 1973.  Especially the distinctive, gravelly voice that has gotten more gravelly with age.  There is less of a singer-songwriter feel and more of a rock feel, maybe a genre called weird-rock with Waits as it’s main if not only member.  To give a flavor of Waits’s lyrics I’ll quote the lyrics from No One Know I’m Gone [the lack of punctuation is Tom’s]:

Here is another song, Poor Edward:

Did you hear the news about Edward?  On the back of his head He had another Face  Was it a women’s face  Or a young girl  They said to remove it would kill him So poor Edward was doomed  The face could laugh and cry  It was his Devil twin And at night she spoke to him Of things heard only in Hell  They were impossible to separate  Chained together for life Finally the bell tolled his doom  He took a suite of rooms  And hung himself and her  From the balcony irons  Some still believe he was freed from her  But I knew her too well  I say she drove him to suicide  And took Poor Edward to Hell.

I don’t quite know what to make of such lyrics.  The seem to paint such a bleak and dreary picture.  A picture of a hopeless world. 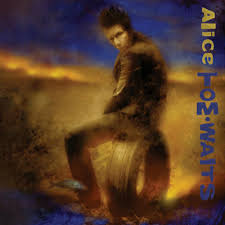 I hadn’t intended to write so much about Tom Waits.  I put on his CD and started writing about him.  I’ve thoroughly enjoyed listening to the music from 1973 as I write.  I’ve not decided if I get any pleasure at all from the 2002 recording.