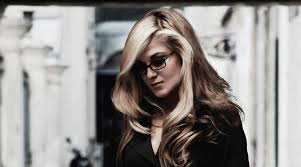 Melody Gardot is a singer whose story and songs are an inspiration.  She was born in 1985 and, according to Wikipedia,

Gardot started music lessons at the age of nine and began playing piano in Philadelphia bars at the age of sixteen on Fridays and Saturdays for four hours a night.

While riding her bicycle in Philadelphia in November 2003, Gardot was struck by an SUV and sustained head, spinal, and pelvic injuries. Confined to a hospital bed for a year, she needed to relearn simple tasks and was left oversensitive to light and sound. Suffering from short- and long-term memory loss, she struggled with her sense of time.

Encouraged by a physician who believed music would help heal her brain, Gardot learned to hum, then to sing into a tape recorder, and eventually to write songs.

For several years, she traveled with a physiotherapist and carried a transcutaneous electrical nerve stimulator to reduce pain.

Given her oversensitivity to sound, she chose quieter music. On the treadmill, she listened to bossa nova by Stan Getz. Unable to sit comfortably at the piano, she learned to play guitar on her back.  During her recovery, she wrote songs that became part of the self-produced EP Some Lessons: The Bedroom Sessions. Gardot was reluctant to record her songs at first, stating that they were too private for the public to hear, but relented and allowed her songs to be played on a Philadelphia radio station.

Here are a few of her best: